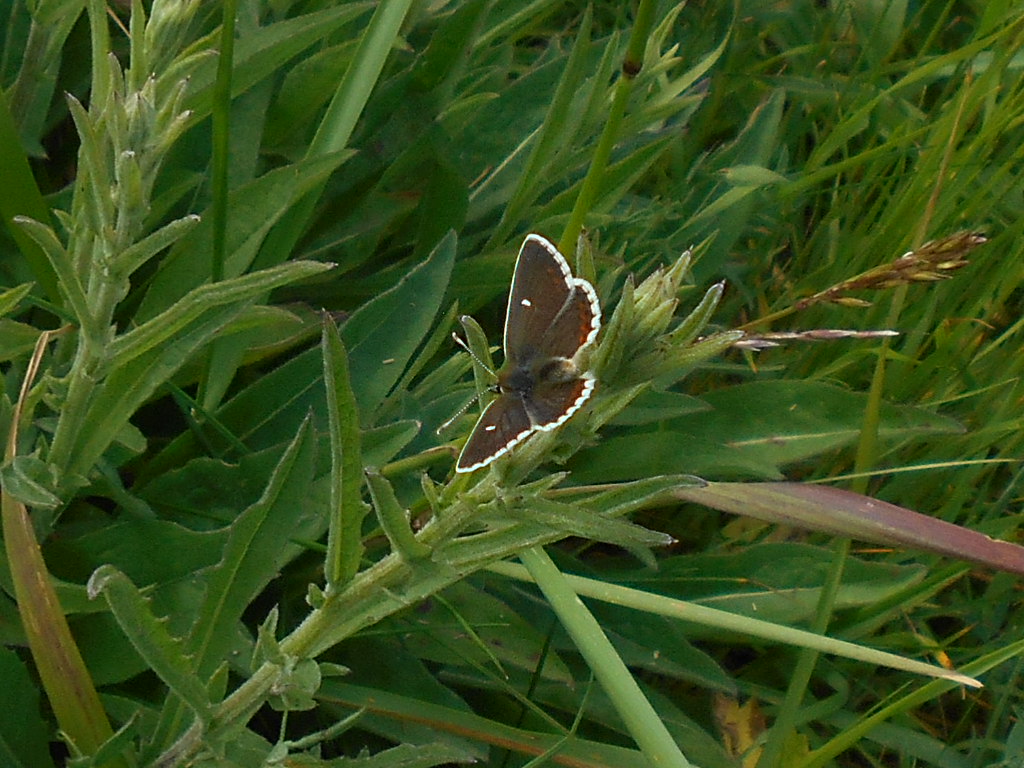 Many of our butterflies are in steep decline, especially those species which already occur in smaller numbers and have rather more specialist needs. Species such as the delightful little, Northern Brown Argus Butterfly which lives in small scattered colonies in a few favoured habitats. Although also found in other parts of Europe, the species is classed as locally rare in Britain where its distribution has declined by an estimated 27% since the 1970s. It’s main stronghold in Fife is to be found along the slopes of Kincraig, between Earlsferry and Shell Bay, as shown in the photograph. This site provides all its needs; sheltered patches of bare earth where the butterflies can sun themselves, nectar rich flowers for nourishment and most importantly, Rockrose, its larval food plant, where the precious eggs are laid and where the caterpillars develop.

Because it has very specific habitat needs these butterflies are particularly vulnerable to any sort of change or disturbance to their environment.

There was very real concern, when in 2013 and 2014 large sections of vegetation were destroyed by two major grass fires. So extensive was the damage to their habitat, local butterfly enthusiasts feared that the colony would be completely wiped out.

However, as the vegetation gradually began to recover, butterfly recorders noted that all the odds, the insects held on, and their numbers have slowly been increasing ever since!

It is always encouraging to learn how nature can bounce back from such devastating events; however, this is also a cautionary tale! The species could so easily have been wiped out of the area because of one careless act.

You can help to protect the Northern Brown Argus as well as other wildlife, by keeping to the footpaths where possible and by being extra careful with anything which could prove to be a fire risk, particularly during dry weather.

Thanks must go to the dedicated local butterfly volunteer who has been tirelessly recording the numbers of this species and has been a true champion to their cause! The photographs were taken during recent surveys and show a newly emerged adult and a mating pair, which will hopefully contribute to the next generation!

If you are lucky enough to be walking along this section of the Fife Coastal Path in high summer be sure to look out for these butterflies, ” dancing” in the sunshine as they forage amongst the wildflowers. Hopefully, their numbers will continue to increase and they, and their special habitat, will be safe for a long time to come…!

To find out more about the Northern Brown Argus and other butterfly species visit – https://butterfly-conservation.org/…/conservat…/scotland

Blog contributed by Aidan Duncan, FCCT Education Manager. When I think back to some of my most memor...
View Article